We Live and We Learn: 4 Lessons We Learned After a Year of Mixcloud LIVE

We launched Mixcloud LIVE in early 2020 in response to a demand for live streaming, but we could have never predicted the cultural shift that happened alongside it. 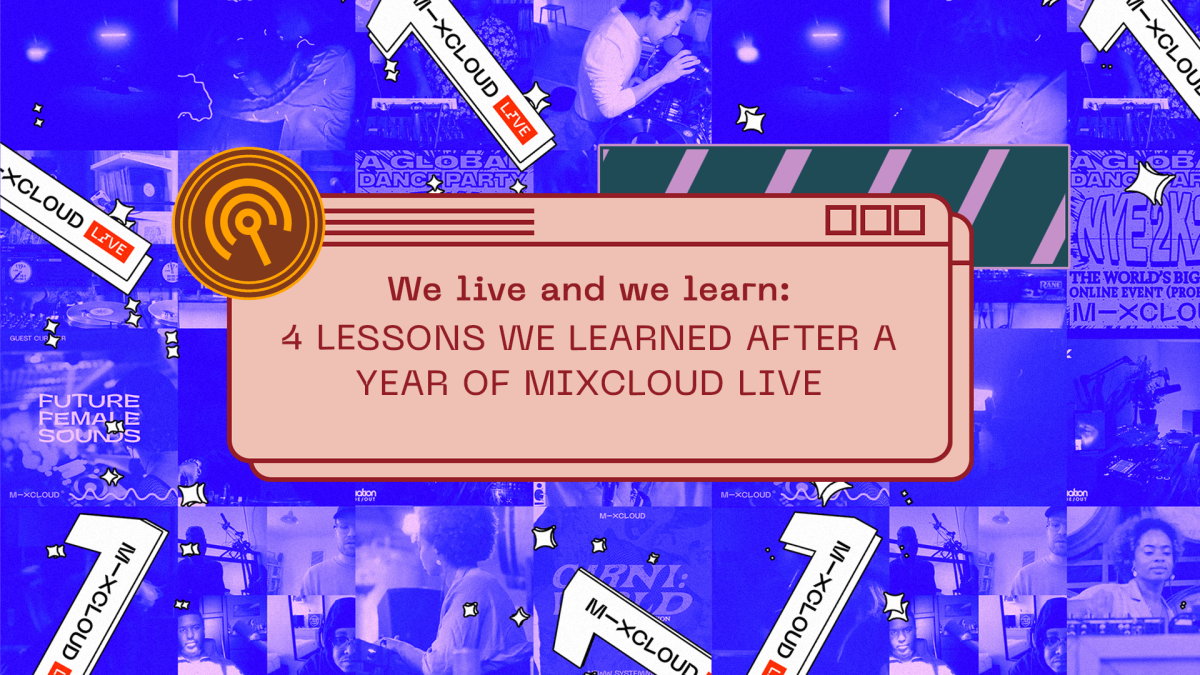 When you come through for your community, they will do the same for you. We launched Mixcloud LIVE in early 2020 in response to a demand for live streaming; isolated Creators needed to continue creating despite this global pandemic. But we could have never predicted the cultural shift that happened alongside it.


The past 12 months of live streaming has flipped the music industry on its back, transforming how musicians entertain and fans engage. Witnessing how our community has adapted, experimented, and innovated with this new medium has not only been inspiring, but has also taught us many lessons.

Even though live streaming has been around since the 90s, only a few DJs used the technology. In 2020, live streaming became a lifeline for musicians and fans to connect globally.

Live streaming has enabled Creators to grow global audiences and this has levelled the playing field. Now, Creators big and small compete in the same space — the digital space. That’s what we mean by the democratisation of the industry. All you need is a laptop and an internet connection to get started. It has allowed DJs to broadcast across borders, erasing the limitations they’d face in real life (IRL.)

But with all this innovation and independence comes a new set of challenges for performers.

There are already so many moving pieces to the curation of a live stream. Everything from sound quality, video quality, internet connectivity, chat room engagement, camera placement, and lighting contributes to a successful digital performance. And up until now, streaming platforms weren’t built with DJs and musicians in mind.
‍

Breaking down the ins and outs of licensing online music would take a whole book. But what you need to know is that live streaming adds another dimension of complexity to acquiring license.

YouTube, Twitch, Facebook, or Instagram may be giants of live streaming, but they are not built for music. For example, Instagram, live is a vertical format (which often cuts off the decks), and the audio quality is infamously poor. More importantly, Instagram doesn’t (legally) want DJs using it’s platform and actively takes them down.

The same goes for the other platforms mentioned above. They don’t have the licences required for music to be played on their platforms and their user bases are so broad that the needs of DJs and musicians get lost in the noise. This is why we believe they can’t be a sustainable solution for Creators who have built their careers in music. Asking those Creators to shoulder legal risks is unreasonable and unethical.

DJs come to Mixcloud to feel that they contribute to a sustainable ecosystem for all artists — and we have licences in place so that Creators can perform worry-free and all the rights holders get paid.
‍

DJs are not the only kinds of Creators that live stream on Mixcloud. Over the last year, we’ve hosted spoken word sessions, book readings, and weekly workshops. But a new thread that has emerged is the intersection of audio and visual artists creating immersive DJ sets— Creators like Basement Tapes a New York-based collective that uses visual synthesis to create experimental Dj sets.

Co-founder DJ Lita had never streamed before, but she knew she wanted to create something that transcended the typical DJ sets. She joined forces with Co-founder and photographer Anthony Flores, who taught her so much. And now she’s taking a videography and lighting course, “I initially thought that using the lights in my basement would be enough,” she laughs and explains that because they use a green screen, the DJs movement is harder to pick up without professional lighting.

When we launched  “Unlisted Streams” in February, we kept first-time livestreamers in mind. Those that needed to experiment before being watched. Not every Creator is comfortable while 300 or 3,000 viewers watch them live. That’s one of the reasons Basement Tapes pre-record their sets. They take the time to produce complex visuals that accompany the DJ (who isn’t necessarily in the frame during their hour-long shows) and then go live. “We’re trying to curate a high-quality visual-show,” says Anthony Flores, the collective’s designer, “an intimate experience that we share together in this one moment, and many of our fans watch for that reason.”
‍

4. Live streaming has removed barriers between artists and fans.

A feature as simple as the chatroom has shifted the nature of artist-to-fan, as well as fan-to fan engagement. A phenomenon that could only have come to be in the digital space.

For example, we’ve heard incredible stories from Creators meeting their chat-room fans in real life (IRL). Kareem Marcelle, who runs the NYC-based Radio Station GMGT.Live, tells me “that there are 50 or 60 regulars that he knows by first-name basis and that we consider them family.” What’s more, Kareem even visited one of these regulars, an older Caribbean lady, after her surgery and offered her GMGT merch.

Empowering Creators to be independent, in control, and first to interact with their fans has always been part of Mixcloud’s value system. With Mixcloud PRO, DJs get to be their own promoters, agents, and managers! But with this newfound autonomy comes with new responsibilities.

Tia Korpe, the director of Future Female Sounds, a global non-profit that empowers, educates and books female DJs, chose Mixcloud because it felt like a safe space for her community. “I tried other platforms like Twitch, and my experience with the chat-room wasn’t great”, she admits, “I didn’t feel this was a space for musicians or DJs, and since we book female and gender-minority DJs, I needed it to be safe.” By safe, Tia is referring to trolls visitors who disturb the space.

Never before have DJs needed to mediate, let alone protect their community in this way. Learning to create safe spaces and ensuring that everyone in the chat is secure and having fun is now a function of their DJ role.
‍

There’s no doubt that moving forward, how people “go out” will change. DJs will learn new skills and have more independence as entertainers. And the more experimentation we see on Mixcloud, the more we believe that hybrid models are the future of nightlife — models that merge the organic interaction of IRL events with the safety and accessibility of the digital space.

Mixcloud is fully dedicated to building and improving our product with these learnings in mind. And to say that we’re excited by some of the things we’ve seen in the pipeline is an understatement, so stay tuned and watch this space!