Looking Forward: As Clubs Open Again, Streaming Will Shape the Future of Nightlife

During lockdowns, live streaming became the lifeline of nightlife and club culture. As clubs start to open again, how will streaming fit into a post-pandemic landscape? 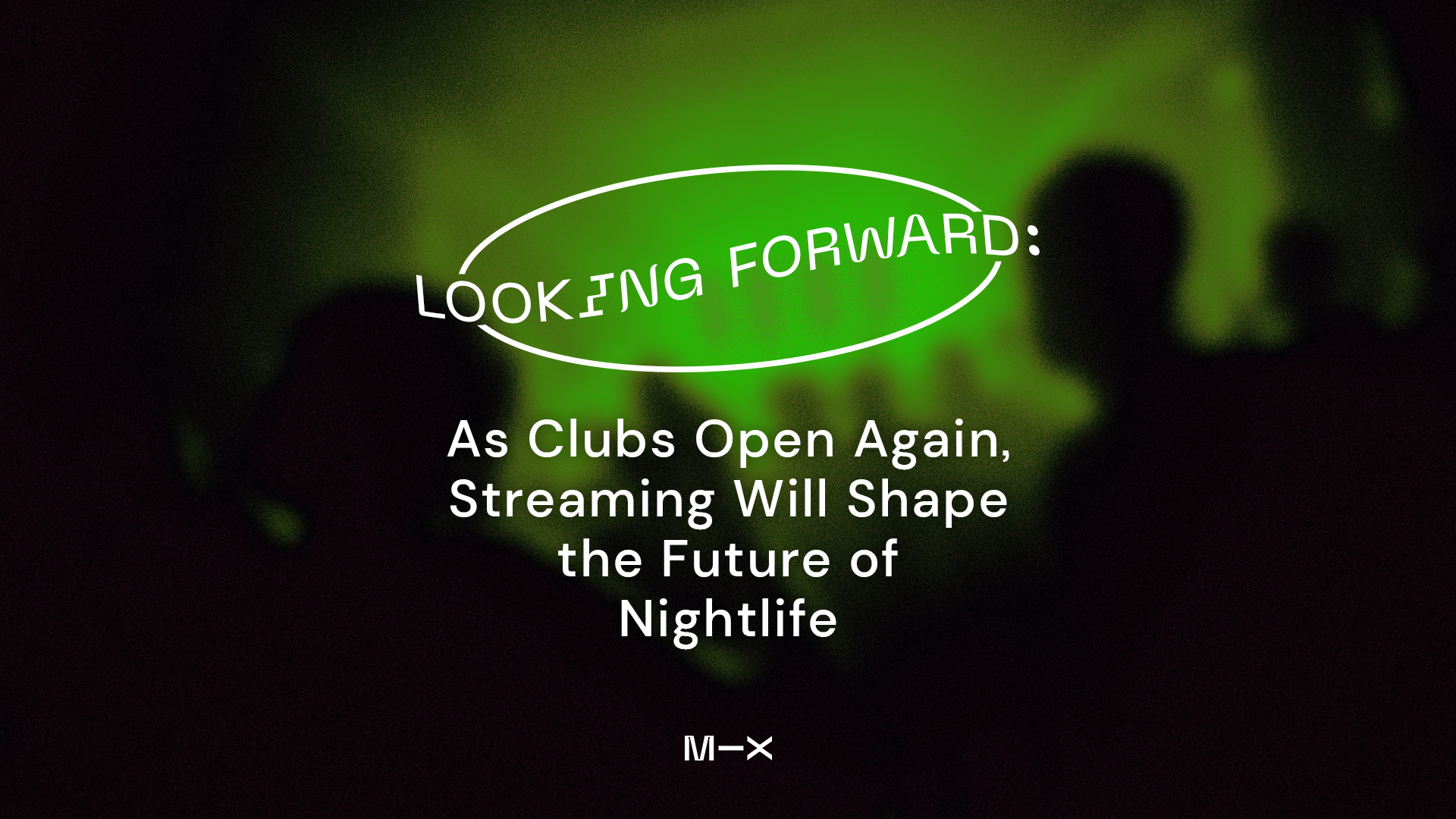 During lockdowns, live streaming became the lifeline of nightlife and club culture. As clubs start to open again, how will streaming fit into a post-pandemic landscape?

Although streaming will never replace the organic experience of a club, we believe that it will fundamentally shift nightlife’s center of gravity in the long term. We’re heading into an era of sophisticated hybrid models: the best of both worlds. Live streaming will offer creators new avenues for monetization and reach, and it’s unlikely that clubs can overlook that. If anything, Clubs benefit from hybrid IRL and URL models, but the details of how they adapt are to be seen.

Here’s our take on how live-streaming will shape the future of nightlife.

In 2019, the electronic music industry was valued at $7.2BN, but that scale came at a cost to local scenes and communities. The industry relied on big-name DJs that traveled the globe, and promoters believed that only these high-profile guests could sell out their shows. “Headline culture”, as Andy Blackett dubbed it, debilitates the local scenes and encourages a western monopoly of nightlife.

The pandemic put a temporary halt to this cycle. Events that were previously exclusive to a western audience became inclusive. This was true from the smallest club nights to the biggest festivals. Take Glastonbury stages, which hosted a digital alternative to the UK-based event with millions of viewers from over 100 countries.

With travel restricted, local scenes will be more vital. The accessibility of live-streaming will allow more emerging artists to break through and compete on a global scale. Promoters will place a higher value on booking regional DJs and empowering their communities. Sourcing from local talent will be cheaper for venues and be an environmentally conscious step for nightlife as a whole.

Mixcloud is already home to some exciting hybrid shows. Cakeshop Seoul and Fabric, for example, have been streaming directly from their venue. In both cases, the stream was accessible and free. In Cakeshop’s case, the club was filled with dancing ravers.

The future very rarely starts in the west, and nightlife will be no exception. For instance, South Korea is far ahead in terms of experimenting with hybrid concert models. The established streaming platform V-Live has been home to incredible hybrid shows and is pioneering the world of live streaming music. What’s more, SHINee shows, for instance, explore interactive VR live streams and perform them in purpose-built stadiums. Another example is Seoul Community Radio’s launch of onit.life, a virtual clubbing and gaming platform. Note, the intersectionality of gaming and nightlife is going to continue evolving due to popular demand and the success of past concerts.

With that said, where venues choose to host their streams and how they monetize their viewership may change over time. Clubs may decide to broadcast live streams on their domains, behind a paywall.

The very definition of an “audience” has taken on new dimensions in the pandemic. There is no bottle service or VIP in the digital realm, accessibility is the fuel that makes this medium revolutionary.

One great example of this is Femme Fest. In December, DJ Megatronic organized a two-day outdoor festival in Dubai that “projected DJ sets inside the warehouse with a full sound set up.” It was an all-female lineup intended to highlight local Arab DJs in the region. And considering the limitations on nightlife in the U.A.E, Femme Fest is an excellent example of how live-streaming can be a safe tool for social change.

What’s more, streaming has also shone a light on how exclusive current nightlife models are.

“It's so wild that we didn't notice — as able-bodied people — how inaccessible IRL nightlife was,” says Ceréna Sierra, co-founder of Club Quarantine. Club Q is a collective, community, and unadulterated safe space for LGBTQ and BIPOC music lovers worldwide. Ceréna tells me that they were shocked by the number of disabled people who expressed gratitude to Club Q for including them in a space that was otherwise out of reach IRL.

Club Q is an online party that grew to fame at the peak of the pandemic, inviting guests like Charlie XCX, Rico Nasty, and others. What’s fascinating about Club Q is how they’ve found a way to successfully merge the organic interactions of IRL events with the safety and accessibility of the digital space. By spotlighting and “activating” the chatroom they engage individuals personally. “We have a moderator and host and they work together throughout the 3-hour party. The moderator is the one who's making sure that the chat is safe, cool, and cute. They take out any trolls and spotlight people. And then the host is keeping the energy alive,” explains Ceréna.

Club Q showcases how digital spaces could be viable competitors for venues. If anything, this model succeeds at establishing more intimate connections between fans. But, it wouldn’t be doable for an individual Creator to be this engaged in the chat — and that’s especially true if they’re performing at a venue. How clubs interact with their URL fans while hosting an IRL audience is yet to be seen.

Still, Club Q exposes pre-pandemic nightlife and how shockingly inaccessible it was to disabled people (or individuals who weren’t comfortable in those spaces.) And if clubs don’t take on more inclusive models, they will be made redundant by the Club Q’s of this world.

Where does Mixcloud fit

As music creators navigate a changing industry, Mixcloud’s job is to build the tools that you will need for the future. Our vision is of a far more sustainable ecosystem for music creators, where anyone can play, share and make money from music without worrying about copyright.

Live-streaming is a core part of that future.

We intend to continue improving our live streaming product, making it easy for DJs, artists, and venues to merge live audiences with their online communities

As one of the few streaming platforms that cater specifically to a musical community, we believe we are uniquely positioned to grow alongside venues, clubs, and DJs as they experiment.